A 79-year-old Moree grandmother severely assaulted at around 8.30pm on Sunday evening when trying to protect her home and belongings from intruders was less than 24 hours away from embarking on a four-day cruise with her daughter, grand-daughter and son-in-law’s mother.

The woman’s daughter had dropped by her mum’s Boland Drive home just an hour before the horrific assault.

She was there to collect luggage and belongings ahead of the trip the following day to Ballina to pick up her mother-in-law en route to Brisbane.

But instead of looking forward to the trip of a lifetime, the elderly pensioner was rushed to hospital with severe facial and body wounds after being attacked by cowardly assailants with what is believed to be either bricks or pavers.

The victim suffered a broken nose and fractures to both cheekbones as well a deep laceration to her wrist.

There is also damage to her eye sockets that may require surgery. 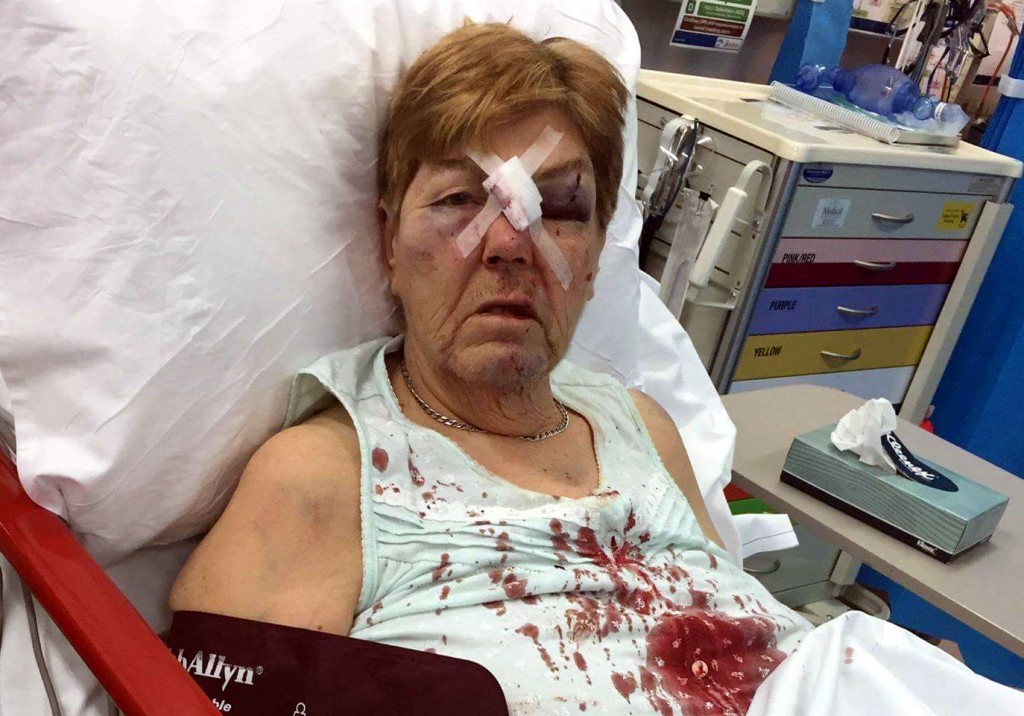 The 79-year-old Moree pensioner in hospital after the brutal attack in her Boland Drive home (Image Supplied).

Property and cash – money saved for the four-day P&O cruise along the Queensland coast from Brisbane to Airlie Beach – was stolen.

The woman is now out of hospital and convalescing with family.

She is too afraid to return home.

“She is simply too scared to go back to her own home . . . too scared to even go back and collect her belongings,” son-in-law Lindsay McAlpin said.

“And she’s a tough old woman, not a sook like that at all.”

Mr McAlpin said his mother-in-law was resting when she heard the noise of broken glass.

“She confronted the intruders in the kitchen and they told her ‘give us your money’. She told them she had no money and to leave or the police would be called,” Mr McAlpin said.

“They went outside for a few a seconds but came back in with three bricks. They threw one in her face and said ‘give us your money’. They threw another, which hit her in the face again, and she collapsed to the ground.

“She said she can remember the intruders stepping over the top of her. They took her handbag and when they walked back over her they pelted her with a third brick.

“It’s all very hard to swallow, I can tell you,” Mr McAlpin said.

“A break-in such as experienced by this lady is extremely disturbing . . . people should be able to feel safe in their homes,” Mr McDonald said.

“Any break-in can be distressing for victims but when there are criminals in this community who are actively targeting the elderly and vulnerable to steal valuables, it is particularly disturbing.

“The elderly and vulnerable deserve to be respected and to live their lives without fear from such criminals.

“Investigators will continue to canvas homes and known offenders in an attempt to identify these persons who prey on innocent and hard-working people,” he said.

“Any persons who saw the males or any suspicious activity in the vicinity of Boland Drive around this time are urged to contact our investigators as a matter of urgency.”

Police are urging anyone with information in relation to this incident to call Crime Stoppers on 1800 333 000 or use the Crime Stoppers online reporting page: https://nsw.crimestoppers.com.au/

Information provided will be treated in the strictest of confidence. Police remind people that they should not report crime information via police Facebook and Twitter pages.

Next post
Special strikeforce requested to “clean up” Moree